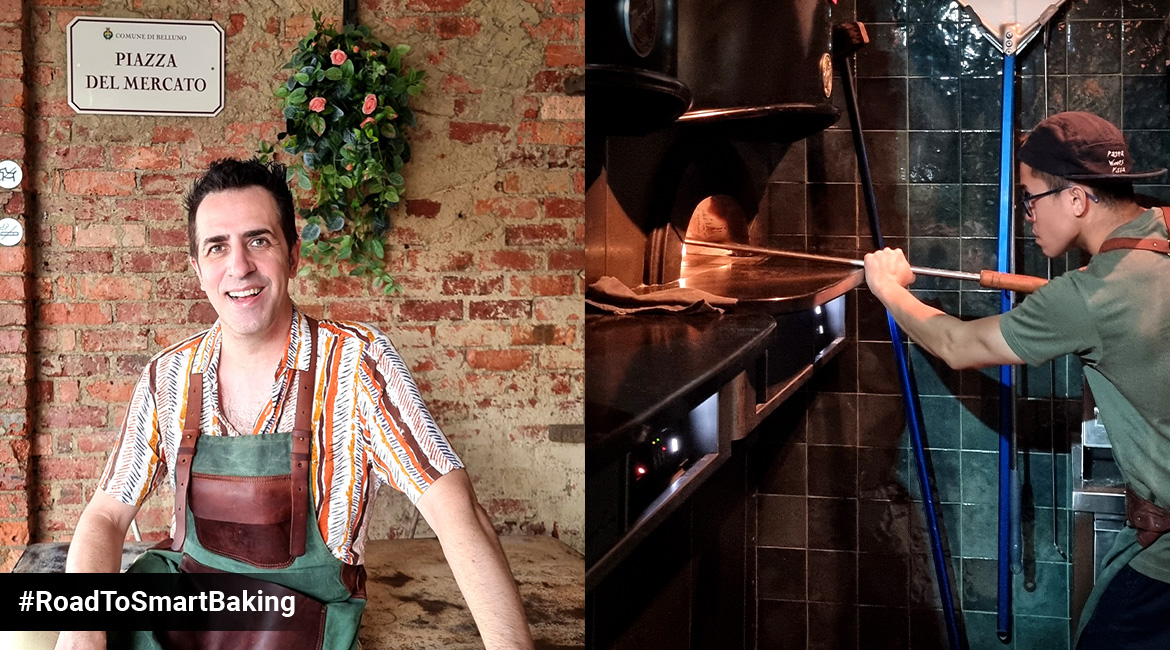 “La Bottega” restaurant was born in 2021 from the passion for dinners with friends of Antonio Miscellaneo, an Italian now permanently based in Singapore. For his restaurant, which keeps that intimate dimension and a ‘dinner with friends’ atmosphere, Antonio chose the heat of Neapolis for baking his contemporary Neapolitan pizza, the centrepiece of his offer that got him in 22nd place in the 50 Top Pizza Asia ranking, as he tells us in this interview:

How did ‘La Bottega’ project come about?
I opened ‘La Bottega’ in August 2021 and it was all new to me from the beginning. Although I am a big fan of cooking, I haven’t a background in food and beverage, as I have always worked with technology.
However, I was already living in Singapore where I had set up ‘Casa Nostra’ which, in a short time, went from being a place where I baked pizza, pasta, ice cream and cold cuts for friends, to becoming a home restaurant de facto, where also friends of my friends wanted to come and pay: within a month I had everything booked and a queue of thousands of people!
The thing that impressed everyone the most was my contemporary Neapolitan pizza, which did not exist in Singapore. The house was too small so I had the idea and the need to open a place where pizza would be the centrepiece.
Since the beginning I was looking for an electric oven that could reach high temperatures, to meet my baking needs. After some research, I was attracted by Neapolis, both for its technological innovation and for the solidity of the brand. Moretti Forni, in fact, is renowned internationally and has a reliable sales network even in Singapore.
After a baking test in the MorettiLAB, once I had tested the oven in person, I no longer had the slightest doubt and immediately purchased three Neapolis.

Why did you choose Neapolis?
I’ve never considered a wood-fired oven, even if the type of product I wanted to make is usually associated with it, because I firmly believe that today, thanks to technology, you can achieve the same baking performance with an electric oven. Neapolis is the most excellent example of this. Moreover, in a city like Singapore, it really doesn’t make sense to buy, transport wood, store it and then burn it and pollute.
Another crucial role in this choice was also played by the ease of training the staff: in Singapore, 99% of the workers who arrive in the kitchen have never seen a wood-fired oven, actually they have never had anything to do with pizza. I already had to spend many hours teaching them all the dough know-how, and having simplified the baking phase helped us a lot to speed up the training and make the pizza makers autonomous right away. In addition, there is no need to turn the pizza when baking on Neapolis or check it. Once I have the settings for my product, I can be sure that they are replicable over time: anyone standing in front of the oven knows exactly how to make my pizza.

What products do you bake on Neapolis?
Depending on the time of day, we offer different tasting sessions, in which pizza is always the protagonist. At dinner, for example, we do a 6-course degustation: 3 starters, followed by a combination of Newpolitan® pizza (Antonio’s contemporary Neapolitan, ed.), first and second courses that can be shared by the diners.
For Sunday brunch, instead, we offer a choice of four traditional Italian dishes, from antipasti to pasta or Newpolitan® pizza as the main course, followed by dessert.
At lunchtime the menu focuses on our unique Supercrunch® pizza or pasta.
We bake different doughs with Neapolis to create different experiences: Newpolitan® stands for ‘new, contemporary way of making Neapolitan pizza’ and is made with a dough that goes through different phases and temperatures for a total of 60 hours before it is ready, while Supercrunch® is inspired by the traditional Roman ‘scrocchiarella’, with a more pronounced crispy crust and a 24-hour fermentation.
For toppings we stay fairly classic, with vegetables and cheeses that we import directly from Italy, while we process and season some cured meats such as guanciale, pancetta, coppa, bresaola and salami directly.

You received a special mention in the 50 Top Pizza Asia – Pacific: what did that mean for you?
It is definitely a nice achievement. It gives us great pleasure to be awarded number 1 in Singapore, as we were the first to bring the concept of contemporary Neapolitan pizza there.
It is an official recognition that we have done something new and different, something that was not there before.
In my work, I feel committed to spreading the culture of pizza, which is why I propose all these different types of pizza, to make them known and appreciated by the local public.

What plans have you got for the future?
I would like to make my pizza easily available to the general public. Now one comes to Bottega for an experience, but what if one wanted a pizza from Antonio, how could one do it?
That’s why my dream is to bring my pizza to every Singaporean’s home with the same quality as if you were enjoying it at the restaurant.