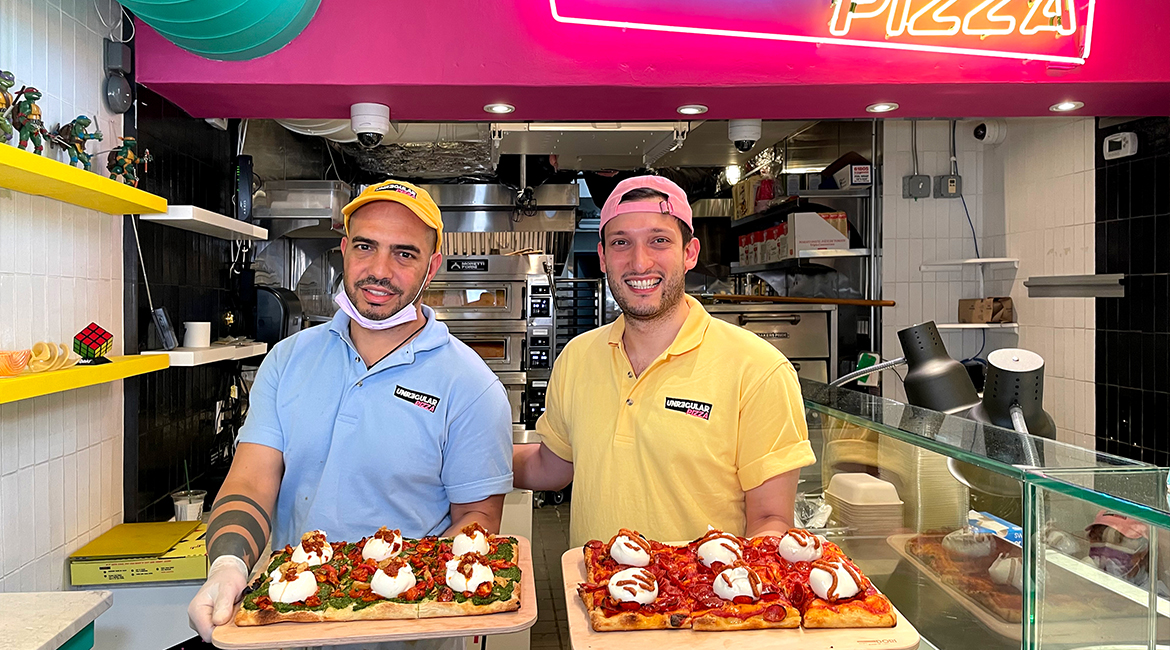 Probably you have already heard of Unregular Pizza, the restaurant that has become a social trend and beyond, considering that Gabriele Lamonaca has also been featured on Fox5, NBC News, Rai and other Italian media to name a few.
Because Unregular Pizza is the perfect successful story anyone could dream of, so let’s interview this Rome-born guy, who moved to New York to study but had pizza in his heart.

Who is Gabriele Lamonaca and how does Unregular Pizza concept begin?

I moved to New York right after my graduation, in 2008. After one year of English language studies I went to college and graduated in Chemistry to become a doctor.
To pay for my studies during college I have worked a lot in food service and I have realised that it could be my way: 3-4 years ago, I had the idea to bring Roman-style pizza to NY. I have developed a business plan, found the right location etc. then my project got stuck due to the pandemic in 2020.
At that point I found myself at home without a job, so I have started making pizza, keeping on experimenting thousands of ideas I had in mind and trying different ingredients combinations. The trickiest thing – in New York as in the rest of the world- was finding the ingredients such as yeast and flour. Even in the USA, suddenly, when everybody had to stay at home, they began making doughs and bread.
Luckily, I could find 1 kg of yeast, that lasted for some time and the very last 25 kg flour pack, which I also hug in one of my IG pics.

And what about the idea of bartering?

Basically, I have started making home made pizzas almost every day and my girlfriend Paola, who owns a communication agency specialised on food, has suggested I started an IG account to start posting pictures of my pizzas, in order to have a fan base for when I could have opened my pizzeria.
Then my friends in New York asked me if I could sell and deliver the pizzas to their place.
I thought “maybe I can create a small activity from home”, but everything was restricted, I could only make max 2-3 pizzas per day and the delivery was really hard: I couldn’t use the subway, so I had to use a bike at the beginning. Probably the successful idea was to get a feedback on my products, so I have decided not to ask for money, but to barter with something homemade, considering that everybody had become chefs and bakers.
In each barter you see passion, talent and creativity that people have, this is the true value of the exchange.

The barter intuition and social media made you famous and you have finally opened your brick-and-mortar restaurant, “Unregular Pizza”, with a Moretti oven: why this choice?

I knew other people using Moretti Forni both in New York and Philadelphia and they made a Roman-style pizza I liked a lot.
Everybody has described it as a high-quality oven, capable to keep the heat well and surely easy to use compared to other ovens, a thing that I have tried myself.

One of our mantras is “heat is an ingredient®. For a perfect result it must be of the best quality”: do you agree?

Surely heat has a key role in what we make. For almost one year I have cooked my pizzas at home, with all the difficulties in baking management, times etc. when I finally was in front of a professional oven it felt really, really good. 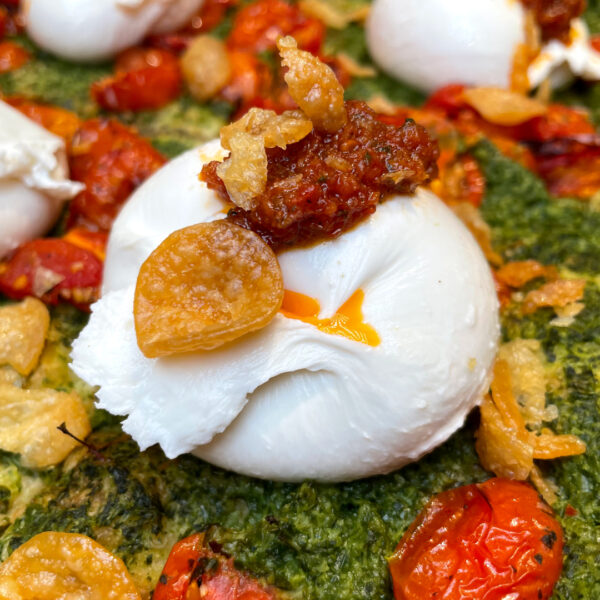 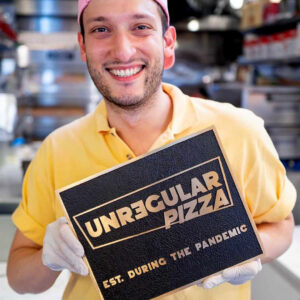 What kind of products do you bake with P series “Amalfi”?

We make two different products: Roman-style pan pizza and classic pizza baked on stone. We need to play with different temperatures and percentages of ceiling and floor.
We also offer some deli, using the oven to cook lasagne and meatballs, etc. We have 3 decks and all of them are set with various ceiling and deck temperatures and percentages, which we modify based on what we bake. We are really happy with it.

What feature do you appreciate the most?

The heat is kept really well and it’s really user-friendly, this was the key aspect for me: in USA we lack of specialised staff unlike Italy, finding expert pizza makers is really hard, so you must train various people, therefore it is essential that the oven is easy and within everybody’s grasp.

What are your plans for the future?

I’d love to spread my concept of high-quality pizza and good food everywhere in the USA.

You have already opened your restaurant, but you are keeping the barter tradition once a day: how is it going?

We are still testing this initiative and it’s going really well; people love it because they want to share their creativity and what they make at home.
Bartering with one person at the time is making it in the right way, giving the right value and meaning: the customer tries our products, is satisfied but also emotionally involved, triggering a positive word of mouth that is bearing fruits.
We will surely repeat this format in our next openings in America, and who knows, maybe in Italy too!

Peperoncino, the pizzeria in Sydney that has chosen serieS heat
19 December 2022