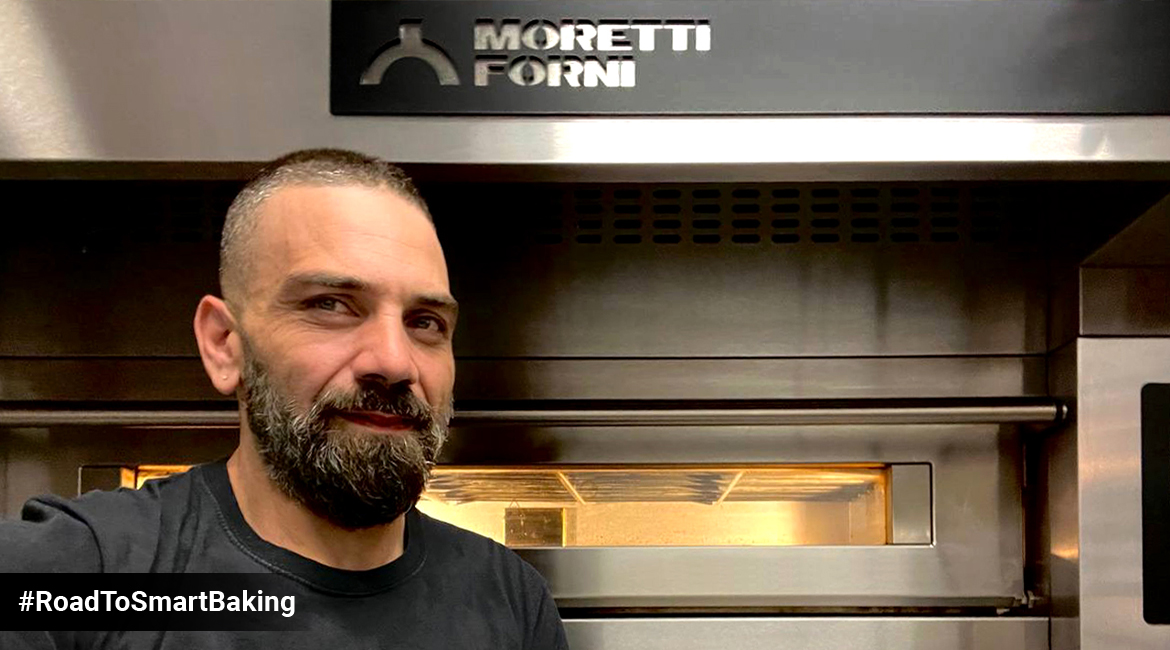 Baking after baking I realised that serieS is a wonder

I Fontana is Pietro Fontana’s ambitious project, a rapidly rising name on the Italian pizzeria scene. With the opening of three pizza shops in just two years, awards and recognitions were not long in coming for this young Pizza Chef. Pietro had important experiences abroad that he brought back with a great desire to innovate, choosing the perfect and sustainable baking of our S series deck ovens for his locations.
Today Pietro has a staff of 30 people, with whom he makes “many super interesting things”, as he reveals in this interview:

How was ‘I Fontana’ project born?
“The choice of this name is linked to my family, with whom I run my restaurant. First of all, there is my wife, who takes care of the fried food line, then there are our sons (14, 13 and 7 years old) that always follow us at work and are already very passionate about the pizza world. So, I chose this name because I hope that one day my children will be the ones to carry on this project that requires so much commitment and hard work.
We opened the first pizzeria about two and a half years ago: on 6th March 2020 we opened the first pizza parlour, which was immediately closed after only three days due to the lockdown. It was hard but we never gave up, throwing ourselves headlong into this adventure in which I believed more than anyone else.
While planning the opening I had discarded the idea of delivery, which turned out to be the only viable way at the time. It immediately worked really well and made us known to so many people, benefiting us when we reopened. In the restart, in fact, we had a real boom.
That moment of forced hiatus, personally, allowed me to do specific product tests and understand many things. After only three months, we were able to enter the 97th place of the 100 best Pizzerias in Italy in the 50Top Pizza ranking (we immediately jumped to 43rd place 2021 ranking, ed).
Once the restaurant was in full swing, we decided to focus on table service, over 250 covers, reserving the take-away for the opening of a dedicated take-away pizzeria, Rustico. Here we offer pizza by the slice, ‘fritti’ and take-away pizzas, all baked on Moretti Forni’s S series, which I really recommend to everyone”.

Let’s go more into detail: what products do you make?
“A pizza with a more pronounced crust and a pizza in pala that is an evolution of my previous experiences. At the beginning, establishing myself with these two products was not easy, since, in Naples’ area, Neapolitan pizza is the best known. So, it took time for customers to appreciate the crispiness of my tray-baked or pizza in pala. Among my specialities there is also ‘pizza nel ruoto’ like the one made by our grandmothers many years ago, but baked in the electric oven, which gives more crunchiness and brings out all the flavours. In this way, even a simple ‘Margherita’, or ‘Marinara’, acquires a more ‘authentic’ flavour. With S series, I also enjoy baking croissants; being a modular oven, I am also considering adding a higher chamber, to be stacked on the current composition in order to start producing panettone as well.
S series is also my partner for the new opening in Pomigliano d’Arco, with around 40 seats, where I will offer super crispy ‘pizza in pala, padellino and teglia’ proposed as an entrée. In this case, we want to raise the bar even higher with our toppings, mixing ‘haute cuisine’ dishes with pizza.

Why did you choose S series? What is the main advantage?
“Certainly, its most important advantage is energy saving. I have talked about it a lot with many of my colleagues who use other equipment, showing them the real difference.
For example, I had applied to the energy supplier for 30 kWh and initially I was only only granted 15 kWh; knowing that the oven would absorb 12.5 kWh per chamber, I had a total of 25 kWh in two chambers and I feared I would not make it. Instead, even today, after opening, I am still working with just the initial allocation of 15 kWh, with the two chambers always switched on and of course all the other equipment such as refrigerators, etc. I have had no further need to increase the kWh, so this means that the oven is consuming very little and this also means saving money. In addition, with its 110% versatility, as I said, it allows me to really bake anything and, indeed, I also consume less gas since I no longer use the hob.
Among my favourite functions I can mention the automatic switch on: I am very satisfied with this aspect because by setting the daily switch on with the Timer, when we arrive at the pizzeria in the afternoon, we find the ovens ready to go.
Once all the baking is done, we put it on standby mode: in the afternoon, we do all the preparation and the work starts to be intense around 20.30/21.00. From the end of preparation until peak time S series literally remains on stand-by, it does not move neither losing or rising the temperature, with relevant savings on the bills. As soon as the workload arrives, with a simple click we can start baking again, knowing that it will always be at the right, constant temperature. If, then, during the evening we need a quick boost, we activate the Power Booster, a truly precious help. 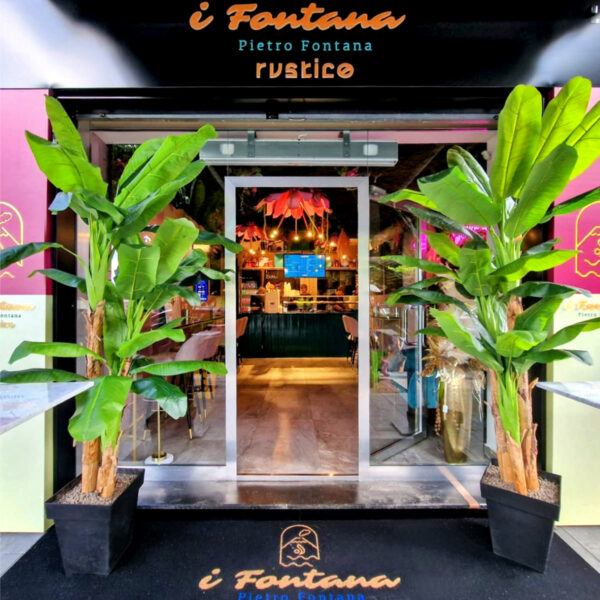 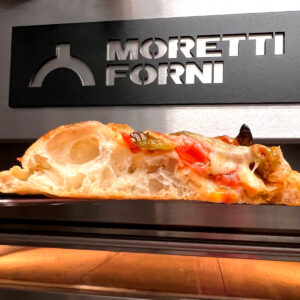 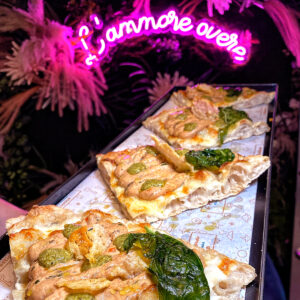 For your products, what added value does the heat of S series offer?
“I started with a gas oven and an electric one of another brand on which I mainly baked pizza in pala. I noticed that something was wrong and I thought it was because of the dough. Then I wanted S series at all costs and when I saw the results of the first baking, I got chills, in fact, I was moved because I was incredulous at the perfection my pizzas had achieved.
At first, I had even thought of a particularly successful dough but, baking after baking, I realised that serieS is a wonder! It really does make a difference and I am very satisfied because with serieS is an assured win, whatever kind of product I will make and whatever texture I will look for: soft, crunchy, etc.
I’m super in love, to the point that I talk with it: I have it nice and shiny every night, both cleaning the steel and the glass, always looking as brand new, even though it’s an oven that ‘fights’ all day every day.
In addition to pizza and bread, we produce a lot of other things too, including gastronomy: semi-dried tomatoes, aubergine parmigiana, toppings such as potatoes or sausage while the oven heats up and, while switching it off, I use it for bruschettas, or use it to dry bread which will become breadcrumbs.
S series is really, really versatile. Needless to say, that at Rustico we no longer use the hob to make the line. For example, we used to fry peppers, now we cut them into strips, put them on a baking tray, season with oil, salt, olives and capers and off to the oven. When we take them out, they really do have a unique taste, certainly due to the cooking process that captures every flavour, concentrating it in the product.

I had known Moretti Forni for many years and I was already in love with electric because for a long time I worked abroad, in Germany, Holland, Luxembourg, where many people were already using this brand.
Finally with S series I have made my dream come true, it’s unbeatable and I really do everything with it: working with a rather special dough technique, with very high hydration, the electric oven dries perfectly and makes my product much more digestible, because there is no residual moisture, the crust takes on the right crunch and the customers are satisfied and confirm the greater digestibility they find, because the crumb inside is not wet or soft, nor dry, because the oven has done its job. Many people believe it is due to the dough or the skill of the pizza maker, but it is the oven that makes the difference and this difference can only be 100% with an electric oven: both gas and wood-fired ovens, in fact, do not give the same drying effect unless you only bake one pizza a night.
I have also said it in my stories on social media, “Moretti for life!“, it is real.
Everybody knows that I am frank and I say what I think: it is important to update on the dough techniques because the pizza and bakery worlds are evolving every day, but the world of baking is evolving too.
The oven plays a fundamental role and it is really important to know the characteristics of the equipment you use. Therefore, if I had to recommend something I would say to choose wisely: for these reasons stated and for many more, choose Moretti!”